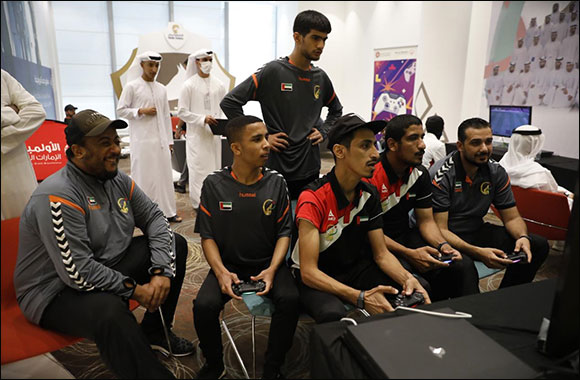 Share Home >> Entertainment
• UAE Special Olympics esports athletes Salma Al Salami and Ahmed Al Jailani reveal the positive impact gaming has had on their everyday lives.
• Special Olympics will be sending a group of up to 20 athletes to the BLAST Premier World Final in Abu Dhabi on 17 and 18 December for them to experience the event and understand more about professional gaming.
• The World Final will see the best eight teams from around the globe competing for a $1m prize pool and chance to be named world champions for 2022
Abu Dhabi, 7th December 2022: UAE’s Special Olympics athletes have spoken about how gaming has helped them improve their skills in their everyday lives as they look forward to attending this month’s BLAST Premier World Final, an elite esports tournament to be held in Abu Dhabi.
The rapid emergence of esports, the term for competitive gaming, is transforming the gaming industry and the public perception is changing with the Middle East among the regions embracing it, attracting a significant number of gamers in the process.
The Special Olympics UAE is one of many organisations that are realising the enormous potential it has including educating and inclusion and have a group of People of Determination athletes that have an interest in gaming.
Salma Al Salami, 18, is one of the esports athletes and prefers playing FIFA given she has a passion for football. She said: “One of the key aspects when it comes to FIFA is that you need to create your own strategies and tactics, so I’ve been able to think logically and develop my problem solving skills – aspects that I carry over when I play football myself.
“I really enjoy gaming and the Special Olympics are doing a great job in giving us opportunities to play and meet new people while showcasing my skills for sports and hobbies that I love.”
For Ahmed Al Jailani, his interest in gaming began at an early age. The 33-year-old said: “I started off by playing with my siblings and I really enjoyed gaming and the thought process that occurs when playing a game as well the development in my skills when playing a particular video game.
“You need to think differently on how to win especially when I like playing FIFA or racing games while I am now making quick and accurate decisions and working together as a team – all of which are helping me in my everyday lives. The support I get from the Special Olympics is great and I am very thankful to them for providing opportunities to follow my passion.”
Both of them will be among a group of 20 Special Olympics athletes that will attend the BLAST Premier World Final, a global esports tournament organised by BLAST Premier. It is in partnership with AD Gaming - a pioneering gaming and esports initiative, and part of BLAST’s on-going efforts to grow the gaming landscape and attract wider audiences of different nationalities and abilities.
Charlotte Kenny, Managing Director of BLAST Premier said: “We are delighted to be hosting the Special Olympics athletes at the BLAST Premier World Final this month. Gaming and esports is such a unique space due to the accessibility it provides to players and fans.
“Their visit will provide an exclusive opportunity for them to experience an incredible global esports tournament on their own doorstep. By going behind-the-scenes and meeting the world’s best esports players, they will be able to get an insight into the world of competitive gaming along with the opportunities and experiences that come with it.”
For Al Jailani and Al Salami, they cannot wait to watch the tournament in-person.
“I am very excited for the BLAST Premier World Final and I am looking forward to meeting the esports athletes and having a conversation with them to further develop my own skills in video games,” said Al Salami.
Al Jailani added: “This is a tournament that I will be watching for the first time and it really excites me that I’ll be involved in it and I cannot wait to witness what will be an amazing tournament.”

Over 90 UAE Nationals Compete in the UAE Wild Card Championship, Joining the Rac ...

11th Pink Caravan Ride Brings Awareness and Early Detection to the Forefront in ...

UAE Go on the Attack to Climb Podium at Saudi Tour

World Cancer Day: What Is Hematology Oncology? A Closer Look at These Cancer Spe ...

MI Emirates Fan Carnival is a Celebration of Fans and their Love for Cricket, wi ...

Empower: District Cooling is the most Advantageous Sustainable Cooling Solution ...

PCR's Free Breast Cancer Screenings Rolls Out Across 7 Emirates with Over 30 Med ...